How to get A+ on the SSL Labs test in node.js

Update May 18 2015: CertSimple has added newer, even better ciphers into node.js itself, which appears in node 4. If you're using node 0.12, grab the cipher list from the latest node source which contains our changes, then add HSTS support per this article.

The SSL Labs test examines a wide variety of aspects of HTTP servers, including simulating the handshakes where browsers and servers agree on crypto. It's a good starting point for checking your SSL configuration.

The test evolves over time - as new weaknesses get found in protocols, new technologies emerge that get added to requirements - so while the results here are accurate at publication, they might not be by the time you're reading this. Run your own tests and see.

Lastly: we're running this on node.js because a couple of the modules we use don't yet run on io.js. As you're about to see, io.js is a lot better out of the box than node 0.12 is. If you're using io.js, skip forward to the HSTS steps.

These are also called 'ciphersets' by node devs or just ciphers in the actual node function signatures.

Run the current stable node, 0.12. Start a TLS server. Statistically , it's likely you're using Express, so it will look something like this:

The defaults for https.createServer() are described in the node docs. Expanding on that, you're actually running something like this.

ciphers normally takes a string because that openssl expects, but we use an array and join it because it's a little easier to read, allows us to make comments above individual lines, etc.

Items in ciphers can take a few formats, including:

Now visit the SSL Labs test and test your server. 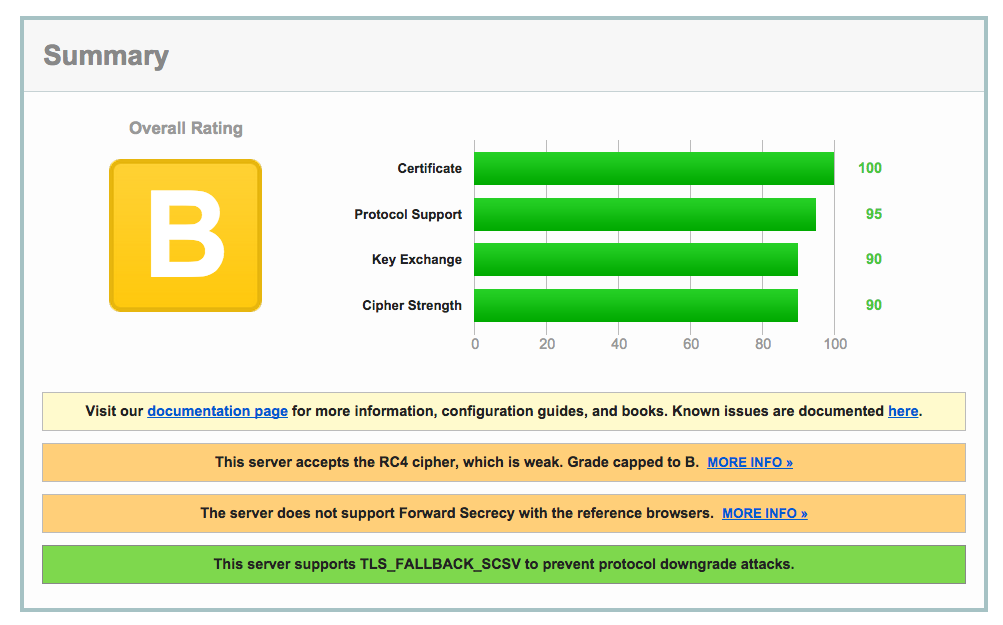 Out of the box, we've got some work to do.

OK, as SSL Labs notes, this server accepts the RC4 cipher, which is weak - there's more too, but we'll get to that later. Let's disable any cipher suite involving RC4 - using a ! just like the MD5 entry:

While we're at it, note this gem from the node docs:

honorCipherOrder : When choosing a cipher, use the server's preferences instead of the client preferences. Although, this option is disabled by default, it is recommended that you use this option in conjunction with the ciphers option to mitigate BEAST attacks. 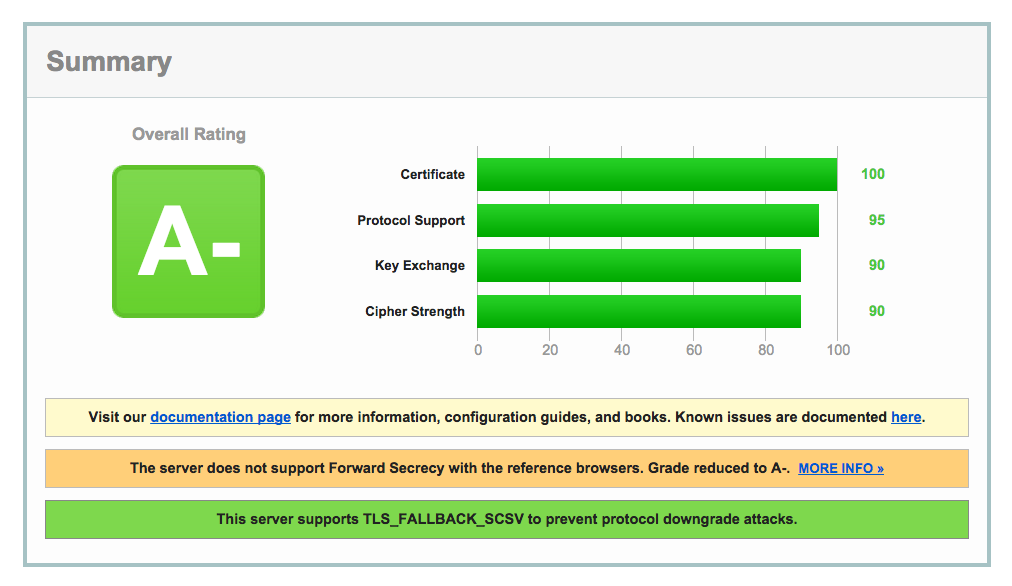 RC4 disabled, our grade is no longer capped at B. But something is broken with forward secrecy...

Perfect forward secrecy is rad. Even if your private key is stolen, the bad guys still need to get the session key of future conversations to read anything. That's amazing! 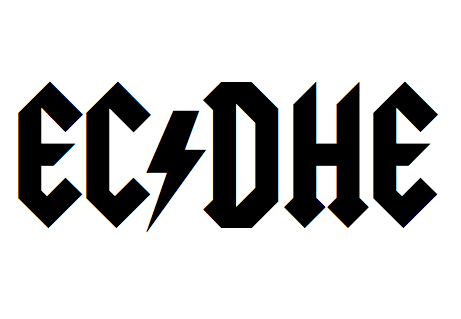 In the browser handshakes for Chrome 40 (which is already old at this point), Android 5.0.0 and Googlebot, you'll see 'No FS' in orange on the right. It turns out that Google product really seem to like AES128-GCM-SHA256 and picks it over the forward secrecy cipher suites (they start with an E for 'ephemeral'. This was found and fixed in io.js already. 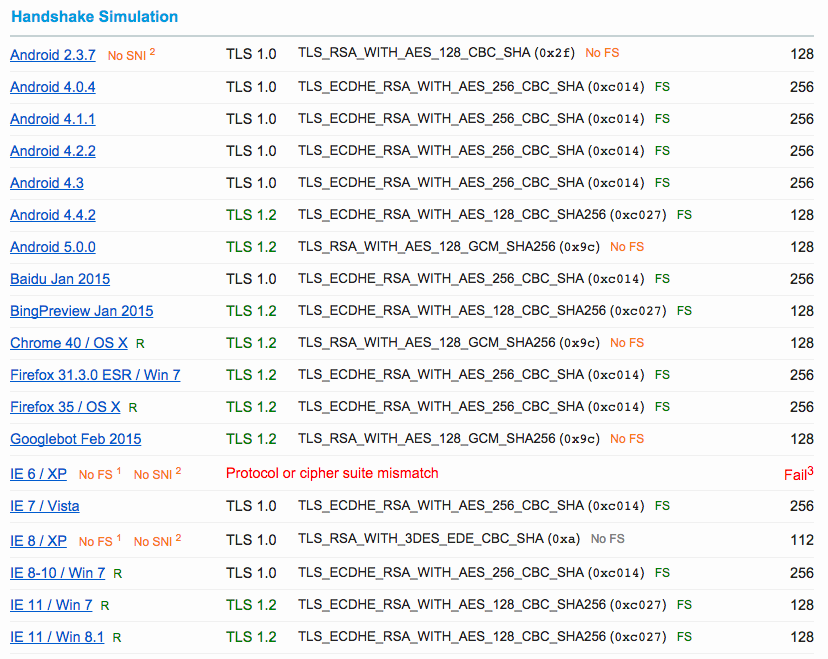 Let's grab the ciphers from the iojs docs: 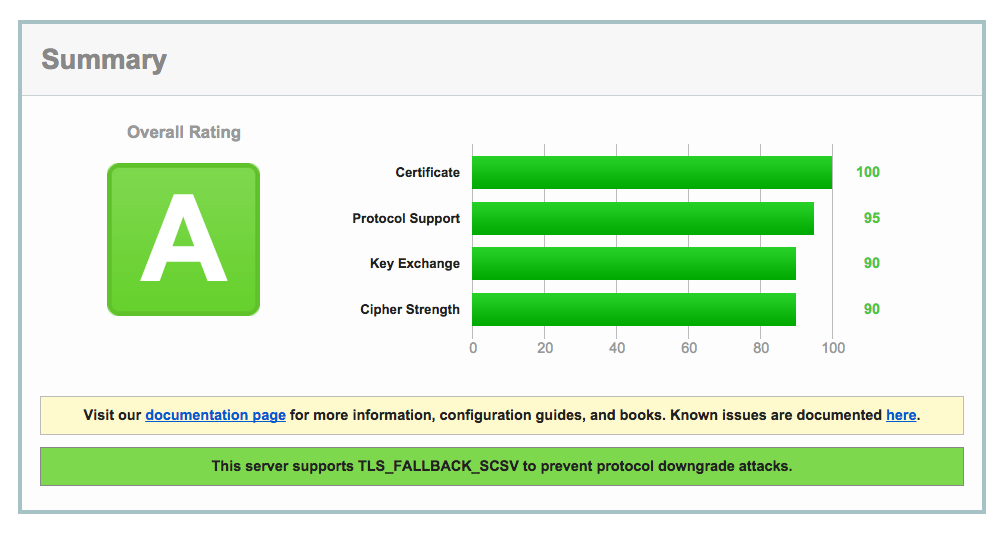 Finally (or firstly for io.js) using HSTS to tell browsers we expect to keep using HTTPS

Setting up HSTS only takes a moment. Grab the helmet module from npm. Assuming Express (because Express is popular), in app.js, it looks like: 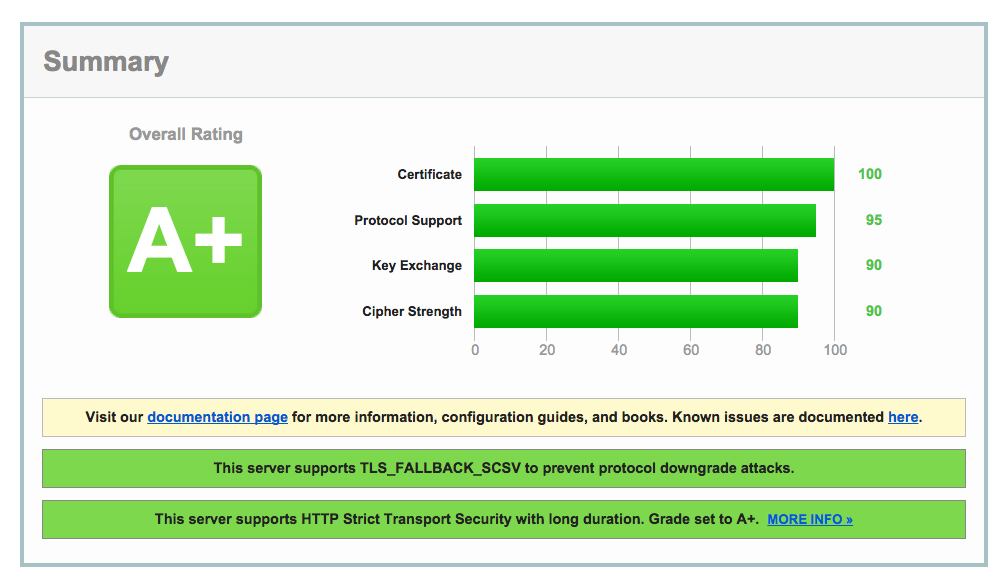 These issues have been resolved in io.js. Even if you can't use io.js yet, you can still use the io.js cipher suite settings to resolve them.

Here's a node 0.12 default Express app modified to get A+ on the SSL Labs test.