Who your browser trusts, and how to control it.

Don't want to trust Lenovo, Dell or the Chinese givernment? You don't have to.

First it was Superfish, then it was Dell's eDellRoot. In both cases, a root level SSL CA - whose private key is normally kept in an offline tamper resistent vault in an secured datacenter - was created with the private key available on desktop computers worldwide. Anyone could use that to impersonate any website they wanted to affected users.

So are there more? Probably. There's also CAs who don't properly handle their keys, like China's CNNIC. How do you know who you trust? And how do you control it?

Occasionally CAs violate the WebTrust requirements: the Chinese government (CNNIC) and Symantec both recently issued fake certificates for google.com. In CNNIC's case, they gave their private key to a third party that issued the fake certificate. CNNIC was removed from the Android and Mozilla root stores, but the Microsoft root store - used by Chrome on Windows and Edge on Windows - only revoked the misissued certificates. Symantec's case was less severe: an accidental, but still troubling, misissuance: in this case the root stores kept their certificates and the employees responsible were fired.

Asides from Apple, Microsoft, Mozilla and Google's root store requirements and WebTrust, other efforts to ensure that CAs behave include certificate transparency, which we've discussed before.

If you're not sure whether ancient CAs or government authorities deserve your trust, you don't have to give it to them.

But there's also you. If you're not sure whether ancient CAs or government authorities deserve your trust, you don't have to give it to them: more specifically, you can mark them as untrusted. This will make your browser show up a warning when you visit sites trusted by them.

Firefox on any OS 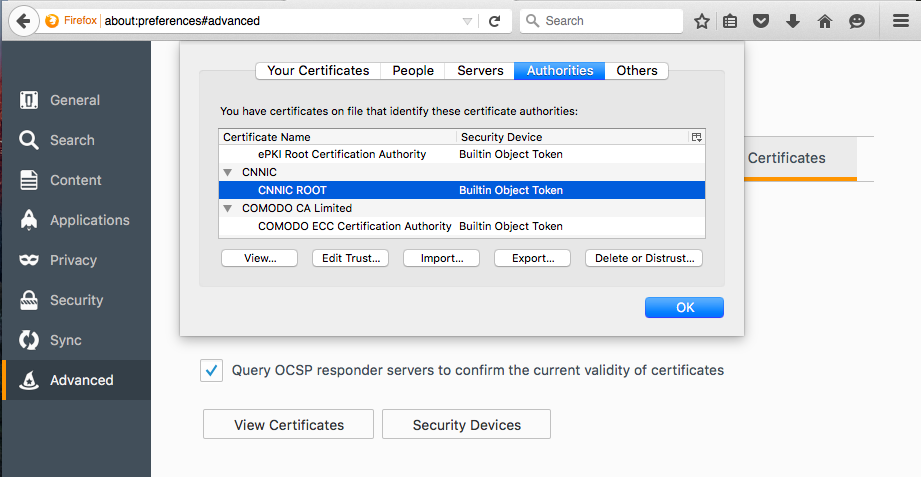 If you're running Edge/IE or Chrome on Windows, you'll need Microsoft's certificate management UI. And a beer.

Edge or Chrome on Windows

If you're using Chrome or Edge on Windows, you'll be using the Windows certificate store. Windows downloads and installs root certificates as needed, but you can actually blacklist a certificate to stop it being installed later.

This is a cumbersome process, but works:

Fetch the certificates Windows would install

Get the full list of trusted root certificates Windows would install from Windows Update, and open it:

Windows Certificate Manager will show all the root certificates that Windows would auto install.

Export the certificate you don't want

Import the certificate back into the 'Untrusted Certificates' group.

You'll now see the certificate listed in the Untrusted Certificates. 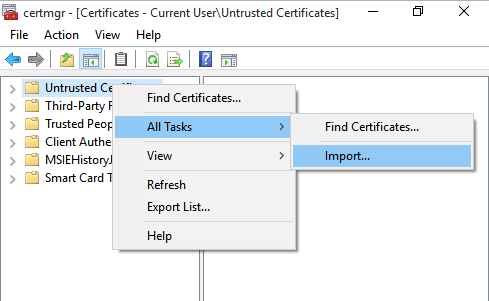 Chrome, Safari and other browsers on OS X

OS X's inbuilt Keychain Access app is competent, similar to Mozilla's. They're also the only key management UI that put a search box in their UI. 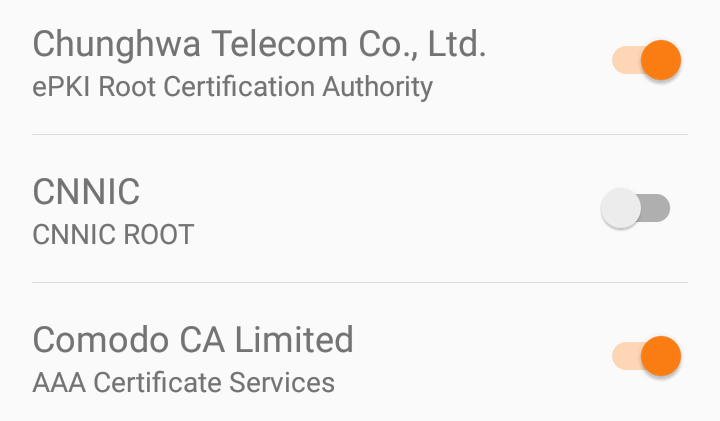 It's incredibly easy to disable roots you don't trust on Android.

In Settings, tap Security > Trusted credentials. Tap the certificate you'd like to remove, scroll down and touch Disable.

If you want to check for and remove added certificates: